United Kingdom - Still In Love With You - Electro Velvet

Electro Velvet was appointed by the BBC to represent the United Kingdom in Vienna.
The title of the song is Still In Love With You.
Electro Velvet are Alex Larke and Bianca Nicholas.
The song is written by David Mindel and Alex Larke.

Watch and listen here at the BBC.

Below image was posted on the Facebook, thanks to Juha for posting it on our Facebook.
Looks like a design for a record company promo cd, which popped up later as a 1-track promo..
They probably know something we don't know: It reads 'The 2015 United Kingdom Winning Entry'. 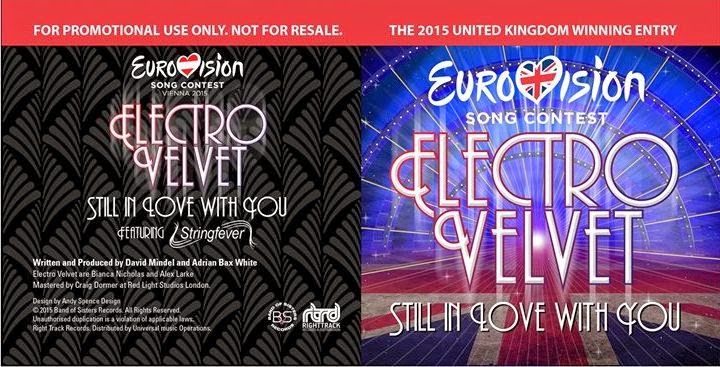 Another promo with the three version was issued in the Netherlands through Red Bullet records. 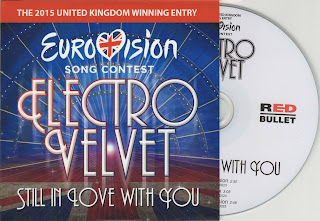 Pledgemusic EP and Vinyl cancelled
Later this year Electro Velvet will be releasing a new CD EP with new tracks and two new versions of Still In Love With You. There will also be a vinyl single with Still In Love With You on one of the double A-sides.
You can pledge to buy these, ( pre-order) and you'll receive the goods when they are released.
EV also have some other offers and all orders get an Access Pass giving access to exclusive updates.
Find out everything here at Pledgemusic.
Update: Sadly the pledge campaign has been cancelled. Read all about the hows and why's here.

Speed
It seems that in some territories the digital release on iTunes has been advanced but the version delivered turns out to be at wrong speed. It's much slower (and 15 seconds longer) than it should be and it turns out to be accidental.
Things have been corrected now.
A similar error version of the Romanian entry release also escaped.

South African singer Colé van Dais teamed up with singer/actor Emmanuel Castis and recorded a coverversion in Afrikaans: Ek's So Lief Vir Jou. It can be found on the 2018 album Colé and Friends.
Find out all about this album here at Eurocovers.

Posted by Eurocovers at 1:36 PM